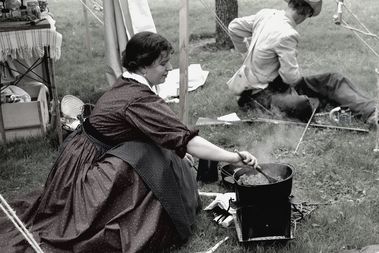 Howdy there! My name is Racheal and I’m number two in a family of three girls. I was homeschooled from birth through high school in a military home (my father served in the Army for 22 years). Since retiring, we have lived in close proximity to my grandparents and for three years I was my Grandpa’s physical therapist. Then, for a year and a half, my older sister and I lived with our Granddaddy while the rest of the family resided in another state with my mother's parents. Winter 2013 we reunited the family by moving Granddaddy up north. He passed away the day before Thanksgiving 2014. Grandpa passed on July 24th, 2016. Grandma is still with us. My elder sister married in April of 2016 and lives down in Dixie with her husband, Scott.

My entire family suffers, to one degree or another, with Chronic Lyme disease along with the "normal" co-infections as well as Mold Toxicty. (Heh...we're Moldy Lymies!)

I am a Reformed Presbyterian…and as you will quickly discover, a staunch Southern Patriot (that has a double meaning). Those seemingly unconnected statements are simply a summation of my religious and political views. The Bible is the infallible Word of God and I believe in Constitutional Republicanism. They are connected, for the one is drawn out of the former.

I enjoy playing music, either by myself or with others. I play the guitar (classical and chords), piano, cello, and trumpet (rather poorly). I also have a bodhran, a banjo which I can play (poorly), a recorder (otherwise known as a flutophone), a couple of harmonicas, and I can play the organ some. I also had a mandolin...but that's story for another time. Anyway, I love music and wish I played better than I do. (I might as well add that I love to dance as well, "Civil War" style and ECD being what I mean when I say "dancing".)

I also enjoy ranching, gardening, and being outside in general; in fact, people look at like I'm nuts when I declare that I enjoy building barb-wire fences! I am also beekeeper--though I can't claim to be wildly successful at wintering my bees!

Creative writing is another interest of mine.  I have, in total, three novels started. I rather question as to whether the first one, a historical fiction book set in 1870-1880's Florida, will ever get completed. I started it when I was fourteen and never really could figure out where it was going...though since beginning it I have learned so much that I would like to incorporate into it. Maybe one of these days I will give it a complete overhaul--oh yes...and an ending!

The second is set in Reconstruction South Carolina. I have the basic outline written and the skeletons of a couple of chapters, but I have a ton of research to do before I can actually write it. I'm a bit of a War Between the States nerd--and I learn more all the time--so it's rather a natural out-flowing of my passion for that particular era.

The third one is, of all things, a dystopia. Confession: I have never, ever read a dystopia. I have never watched a dystopian film. But I had the idea...and so I'm writing one. It's rather weird, since I have always claimed not to like "that kind of stuff".
(I have another site for my short stories–”Stories by Racheal“.)

I would also like to be able to write real screenplays and scripts someday…which brings me to my next interest–filmmaking.

I have my own production company: Freedom's Light Films. While I am currently "nothing more" than a documentary-maker. I finished my first doc The Florida Cow Cavalry in 2016. I have several screenplay ideas that are in various stages of outline and "scribbles" as I call it. And, to showcase how ambitious I am (slightly tongue-in-cheek there), I have another line of of documentaries, both full length and 'shorts', that I aspire to make. My biggest dream, currently, is to make a feature film starring the daring General Nathan Bedford Forrest. Once again, a lot of research required. Good thing I find researching addictive and fun!

In relation (in some way) to the above, I  reenact a Southern civilian during the War Between the States.

I like to say that gunpowder runs in our veins…I love to shoot even though I am not the best shot in the house…that honor goes to Daddy (of course) and then to one of the other girls. I simply just like to shoot for the fun of it (I do like to be accurate at the same time though). However, one of my favorite things is good food. I won't claim honors in the kitchen, though I actually can cook fairly decently.

Please, sit back and have yourself a merry laugh as you read my rambles; I’ll be quite pleased if you enjoy reading them as much as I enjoy writing them!

Below, left to right: One of the last pictures I would get taken with Grandpa--April 2016. Savannah's wedding--April 2016. Independence Day 2016.
A new reenacting dress--2017. A visit with "framily" for Katherine's Birthday--2017. Coldwater Civil War Reenactment--2017.
Independence Day 2017--Delivering the Declaration. A quick stop to see friends on the way home from a reenactment. Remembering WWII 2017--a B-17 flight engineer.